As baseball fanatics we’re an excitable bunch, but nothing quite piques that excitement like a rookie who helps the team right away. That can be a hyped prospect like Joba Chamberlain in 2007, but it doesn’t have to be. Ivan Nova has demonstrated that in the past few weeks. He fit into no one’s top 10 Yanks prospects, but he has come up and helped the Yankees when they needed it most. He’ll take at least one more turn in the rotation, giving the Yanks some flexibility while Andy Pettitte remains on the shelf.

It can be tough to objectively judge a young pitcher through just two starts. Sometimes pitchers get hot at the right time and deceive us for a while. Other times they succeed because the opposing team is unprepared. As the scouting report on Nova makes its rounds we might see teams take a different approach. But for now we’ve seen great success. He only needs to keep doing these things for a couple more turns through the rotation.

Either the guns are hot or he’s gassing hitters

I firmly believe that PitchFX readings in both Toronto and Chicago were a bit hot for the past week. Phil Hughes averaged a mile per hour faster than normal on Wednesday night, and on the same night Javy Vazquez sat around 90 for the first time in a long time. A.J. Burnett averaged about 94.5 mph on Friday night, which is way above his season average. Joba Chamberlain hit 100 yesterday. This all sounds a bit suspect, so I’m more apt to believe that the gun runs hot. It’s more plausible than all of these guys throwing way harder than they have for most of the season.

The scouting report on Ivan Nova has him sitting 92-94, but in his two starts he has averaged 94 per PitchFX, touching 97 at times. I’m pretty sure that this isn’t his actual reading. But even if the actual speed is off, his fastball does have a lot of life on it. It’s not the vertical break you see from Hughes and David Robertson, but it still gets in there quickly and has decent movement. He also throws it a ton, 63 out of 88 pitches yesterday and 47 of 73 on Monday, and throws it for strikes.

He’s not exactly a three-pitch pitcher

Nova boasts just two non-fastball pitches, a curveball and a changeup. As Mike said in the scouting report, his change seems to be his best secondary offering, while the curveball “remains inconsistent.” Yet he’s gone to the curveball readily in the majors, to the neglect of the changeup. That got him into some trouble on Monday, but it worked out well yesterday.

The only real mistake Nova made against the Jays was the hanging curveball to Jose Bautista. That was one of 18 curveballs thrown, and while it was the worst the others weren’t a ton better. It was basically the only pitch that the Jays beat him with. He threw just six for strikes, and generated no swings and misses. Meanwhile he threw just eight curveballs, five for strikes and three swinging. After a performance like that it might seem like he’d go with the changeup more often.

Instead, he did the exact opposite. Just one of his 88 pitches yesterday was a changeup thrown for a strike, while 24 were curveballs. That pitch was much better this time around, as he threw 13 for strikes and generated three swings and misses. Good on Nova for recognizing that it was working. I still wonder, though, what happened to the changeup that has served as his best secondary pitch.

He generates grounders without keeping the ball down

When we see a pitcher who keeps the ball on the ground, we typically think he throws low in the zone. Tim Hudson, Brandon Webb, and other sinkerballers make their livings in the bottom third, and if they’re truly elite the bottom quarter of the zone. In the minors Nova had a healthy groundball rate above 50 percent, and through his first two starts he’s stayed on a similar pace. Of the 43 balls put in play against him 22 have been on the ground. Yet he doesn’t really keep the ball low, as you can see in his strike zone plot from yesterday. 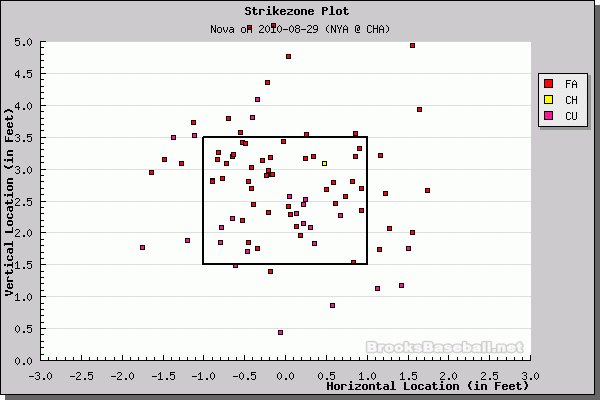 There was a bit more activity low in the zone on Monday, but not to the point where I’d say he’s living down there. Not even close, really. Which is fine. Groundballs can come any way a batter hits them. It’s just odd to see so many grounders generated from pitches high in the zone.

In his two starts Nova has thrown 161 pitches, 102 of which have been strikes, or 63 percent. That’s what you want to see out of a young pitcher. He might not always be able to generate so many swinging strikes — about 9 percent — but if he keeps putting it in the zone, and if opponents keep hitting it on the ground, he might be able to sustain that success. Even when he’s not throwing strikes he avoids the walk, having issued just two free passes total in his two starts.

No, Nova will not sustain the 1.93 ERA he has posted to this point. But there are indicators that he could perhaps continue pitching this well. Beyond the strikes throwing, the walk avoidance, and the ground balls, Nova also has excellent strikeout and home run numbers.

FIP gets a reputation for being a predictive stat, but I’ve never interpreted it that way. It tells us what happened, but only what happened without any regard to fielding. Nova’s 2.89 FIP isn’t based off what his ERA should be, per se, but instead measures his performance in terms of strikeouts, walks, and home runs — which are, again, things that actually happened. It just assumes zero responsibility for defense. While that’s clearly not true, it’s also clearly not true that the pitcher has 100 percent control over his defense, which is what ERA describes.

Nova’s ability to limit fly balls also bodes well for his continuing success. While we have seen plenty of young pitchers come up and get lucky on fly balls, only to experience regression when a few of them start leaving the ballpark, we haven’t seen this from Nova. He has allowed just one home run, which represents 7.7 percent of his fly balls allowed. That makes for a 3.23 xFIP, which is more of a predictive measure than FIP, because it substitutes home runs for theoretical home runs. Nova also has a 3.18 tERA, which is a component ERA based on batted ball type. Even in the complex SIERA formula he sits at 3.19.

Of course, his ability to keep inducing grounders, striking out hitters, and avoiding walks might change as the scouting report gets around. But by all current indications Nova has not only been very good, but could continue to be this good for a while. It’s a pleasant surprise for sure.