River Ave. Blues » Stealing Wins: The 2010 Yankees & Baserunning
The other guy in the A-Rod trade
The Edwin Jackson trade possibility

For the most part, we recognize that the game exists in three distinct parts: hitting, pitching, and fielding. The last two go together to a certain extent. Those are just broad generalizations of course, we know that fielding consists of catching and throwing, that pitching consists of game-calling and executing the pitch, and that hitting consists of swinging a bat and baserunning. That baserunning part is what we’re going to focus on here, and it’s probably the most ignored skill in the game.

The Yankees as a team come off as a terribly bland baserunning squad to the naked eye. Oh yes, it’s fun to watch Brett Gardner soar around the bases at the top speed, and thanks to him the Yanks stole 100+ bases for the fifth consecutive year (103 steals at a 76.9% success rate, to be exact). Beyond Gardner though, the team is loaded with a pack of cloggers led by Mark Teixeira and Jorge Posada. Both Derek Jeter and Alex Rodriguez are slowing down, and even Robbie Cano is nothing special on the basepaths despite being young and relatively athletic. When I looked at the team’s baserunning ability last winter, I found that the 2009 squad was worth 10.30 runs below average in non-stolen base situations. I suggest you go back and read that post just to get familiar with the tools we’re working with here.

That -10.30 run output was an eight run drop-off from 2008 and was the third worst in the game, ahead of only the Braves and Orioles. In sabermetric jargon, it means that the Yankees essentially cost themselves a win on the basepaths. That’s not good, obviously. Thankfully the team improved in these non-stolen base baserunning situations in 2010, jumping all the way up to 0.32 runs above average. It’s a negligible amount when you look at it on its own, but in the context of the last two years it’s a considerable 10.62 run improvement that should not be ignored. Here’s a breakdown of the team’s baserunning performance, and like I said before, I recommend re-reading last year’s post just to get familiar with the stats used… 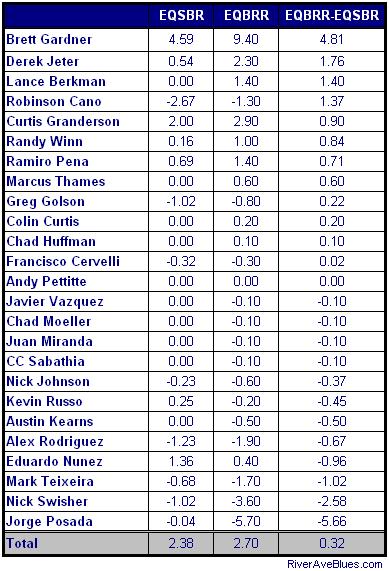 The most noticeable improvement comes from two players: Gardner and Posada. Gardner went from 284 plate appearances and 2.50 runs above average in 2009 to 569 plate appearances and 4.81 runs above average in 2010. It’s quite simple, they gave the guy more playing time and he rewarded them on the bases. Posada was the game’s worst baserunner a season ago (8.23 runs below average), but he improved his effort by two-and-a-half runs this past season for a total of 5.66 runs below average. Yes, it was still the second worst baserunning performance in the league (sorry, Adam LaRoche), but it was an improvement. Jorge stole a career high three bases in 2010, and he also performed better when it came to advancing on base hits according to the component data. That doesn’t necessarily mean he advanced more often, it just means he got thrown out less. Sometimes staying put is the best thing to do.

Jeter’s overall offensive performance cratered in 2010 but his baserunning did rebound. He went from just about a full run below average (0.90 to be exact) in 2009 to 1.76 runs above average, back in line with his career performance. Looks like his ’09 baserunning was just a blip on the radar. Of course, I’d gladly give up those extra three-ish runs of baserunning if it meant Jeter would hit like he did in 2009 again. Replacing Hideki Matsui and Johnny Damon with Curtis Granderson and the Nick Johnson/Marcus Thames/Lance Berkman mash-up resulted in a 0.82 run upgrade on the bases. Replacing Melky Cabrera with Greg Golson, Colin Curtis, Chad Huffman, and Austin Kearns was a tiny little 0.23 run upgrade. Nick Swisher’s baserunning performance fell off by close to two-and-a-half runs, and he was the most significant decline.

Cano’s baserunning skills caught my eye so much last year that I wrote an entire post on the topic. I showed that while he was generally a crappy basestealer, he had improved in the other aspects of baserunning in each of his four big league seasons. Unfortunately the improvement did not continue, as he dropped from 2.46 runs above average in 2009 to just 1.37 runs above average in 2010. A little more than a run isn’t that big of a deal, but it would have been cool to see that improvement continue. I guess Robbie had grown accustomed to simply trotting around the bases last summer (hiyo!). As long as he’s in the black, I’m cool with it.

The Yanks have added just one significant position player this offseason, importing Russell Martin to be the everyday catcher. Unlike most backstops, he’s not a total slug on the bases. He swiped 21 bags in his breakout 2007 season and has stolen at least ten bases in each of his five professional seasons (although he has just a 70.2% success rate) save for 2010, when the hip injury robbed him the season’s final 55 games. Martin’s legs were worth 0.22 runs below average in non-stolen base situations last summer, an improvement from -1.58 runs in 2009 and a downgrade from +0.04 runs in 2008. By no means is he a great baserunner, but for a catcher, he’s pretty good.

Once again, the big thing to take away from this is that baserunning doesn’t impact the game all that much on an individual level. You’ll live with Tex being a below average baserunner because he does quite literally everything else in the game well. Nick Swisher cost the team three runs on the bases? Who cares, he can make that up in a week with his bat. The overall impact at the team level can be significant, and it’s worth nothing that the difference between the best baserunning team (Texas, +12.08 runs) and the worst (Arizona, -10.29) was more than two full wins last year. The Yankees are one of about a dozen teams scrunched right around the league average, give or take three runs in either direction.

More playing time for Gardner, a healthier and improved Granderson, and the addition of Martin should be enough to mitigate any decline by Posada, A-Rod, and Jeter in 2011, hopefully keeping the team right around that league average mark. It would be nice if they were a better and more dynamic team on the bases, sure, but that’s just not their game. Considering the minimal overall impact, that’s perfectly fine with me if they mash away.