More than 24 hours after starting, Game One of the ALDS is officially in the books. The Yankees rode two of their best young homegrown players to a blowout win over the Tigers, giving them a one game to none lead in the best-of-five series.

As you know, this game really started on Friday night. The Yankees and Tigers got just an inning and a half in before rain forced the game to be suspended until Saturday, throwing a wrench into everyone’s pitching plans. CC Sabathia struck out four in his two innings of work, the only blemish a Yankee Stadium special solo homer from Delmon Young. Justin Verlander walked two and allowed a run without letting a ball out of the infield in his inning. It’s a shame, it looked like CC was on and Verlander was struggling. Alas, the skies opened up and we’ll see these two aces in Game Three on Monday.

Have Yourself A Night, Robinson

Just before the playoffs, the Yankees decided to switch up their lineup just a little bit, installing Robinson Cano as the number three hitter against righties while Mark Teixiera slid down to fifth. One game into the playoffs, the move has been a smashing success.

The score was still tied at one in the bottom of the fifth, and Brett Gardner and Derek Jeter combined for two quick outs. Two outs is the perfect time for a go-ahead rally, so Curtis Granderson did the honors of singling to right to extend the inning. Doug Fister, who we’ll talk about in a little while, caught just enough of the plate with a 1-1 fastball, and Cano smashed it out to left. I thought it was gone off the bat, but the ball hit off the table top of the left field wall and bounced back into the field of play. Umpires reviewed the play and (correctly) ruled it a double, but Granderson scored from first anyway. Cano had given the Yankees a 2-1 lead, and he wasn’t close to being done.

Just one inning later, the Yankees really had something cooking. Gardner singled in a pair of runs after Tex doubled (to the opposite field!), Jorge Posada walked, and Russell Martin moved them up with a ground ball. Jeter singled to put runners on the corners, stole second uncontested to put men at second and third, then Granderson drew a walk to load the bases. That was the end of Fister’s day, and in came strikeout machine Al Alburquerque. Alburquerque misses a ton of bats with his slider, but Cano doesn’t miss many sliders when they hang up in the zone. Robbie hit a no-doubt grand slam into the second deck to right, blowing the game open and giving the Yankees a nice seven-run cushion. In 43.1 regular season innings, Alburquerque allowed zero homeruns. That changed two pitches into his postseason career.

Cano added another run-scoring double in the eighth, stretching the lead to 9-1 and allowing him to finish the day 3-for-5 with two doubles and the salami. It was the Yankees first postseason grand slam since Ricky Ledee victimized Rod Beck of the Red Sox in Game Four of the 1999 ALCS. Cano’s six runs driven in are a new Yankees LDS record, and the most by someone wearing pinstripes since Hideki Matsui went off on the Phillies in Game Six of the 2009 World Series. I think he’ll be just fine hitting third, just fine.

It technically wasn’t a start, but who cares? Ivan Nova was absolute money in “relief” of Sabathia, taking the ball to start the third inning and leading the Yankees right to the ninth. He ran into one real jam in the fifth (more on that in a bit), but otherwise did not allow more than one runner on base in an inning until things were all but decided in the ninth. New York’s number two starter struck out five and it seemed like every one came in a big spot, and he got six other outs on the ground.

The two runs Nova allowed came when he was out of the game, otherwise known as garbage time. A Delmon line drive to the foot in the ninth seemed to slow him a bit, but there’s no shame in that. Nova came up huge against a pitcher that came into the game with much more hype, and he’s the reason the Yankees have a one-game lead in the series right now. Cano’s contributions were obviously huge, but Nova really carried the team on his back.

This Ain’t The AL Central, Doug

The Yankees are now 3-0 in the three games they faced Verlander this year, but this isn’t about him. It’s about the job the Yankees did against Fister, who the MSM would have liked you to believe was second coming of Roy Halladay because of his September performance. He allowed the first two batters he faced to reach base, but then retired eleven men in the row. The Yankees showed no mercy the second and third time thought the order; seven of the next ten men they sent to the plate reached base. Fister’s final line was six runs on seven hits and two walks in just 4.2 IP, the first time he allowed more than two runs in an outing since August 14th, his third start as a Tigers. It’s almost like facing seven AL Central teams in your last eight regular season outings can skew your performance.

Cano was obviously the highlight on offense, but this was a total team effort. Gardner’s two-run single in the fifth (in an 0-2 count, no less) was big because it gave the Yankees some breathing room before Cano broke it open. Granderson reached base three times in five plate appearances (the single and two walks), and he saw a total of 30 pitches. That’s huge. Jeter had a pair of hits, and the five through nine hitters all had one hit. Teixeira and Posada added walks. Alex Rodriguez was the only Yankees not to reach base, going 0-for-5 with two strikeouts and the RBI groundout on Friday.

Underrated moment sure to be forgotten because of the blowout: Alex Avila getting thrown out at the plate fifth inning. Nova started to show some kinks in the armor that inning, allowing a walk and two straight singles. Avila chugged around third on the second single, but Jeter’s relay throw from Granderson to home was picture perfect. Martin had plenty of time to apply the tag, the second out of what would be a scoreless inning. If that run scores, all of a sudden the Tigers are up one with men on the corners and just one out. Who knows what happens then.

Gotta mention Posada’s latest stupid baserunning blunder. The Yankees had runners on second and third with no outs against Fister in the second inning, and for whatever reason, Posada broke for home on Gardner’s ground ball to third. He got hung up on the bases and was tagged out. The out completely changed the inning, because instead of second and third with one out, it was first and second with one out. Yes, Fister balked the runners over, but Derek Jeter was already behind in the count by then. Didn’t come back to hurt, but good grief.

In my series preview, I said that the only way to contain the great Miguel Cabrera was by keeping runners off base in front of him. Miggy went 0-for-3 with a walk, but more importantly, he came to the plate just once with men on base, and that wasn’t until the game was all but decided in the ninth inning. Cano, his three-hole hitter counterpart, had runners on base in four of his five plate appearances. Story of the game right there.

Unfortunately, Mariano Rivera was pressed into action when Luis Ayala couldn’t record the final two outs of the game after Nova exited. He only threw three pitches (a strikeout, of course), but these two clubs will play three games in the next three days. Wasting some of those bullets with a six-run lead, even if the bases were loaded, is not inconsequential*.

* Just be clear, I’m not complaining about Mo being used, just that Ayala was so awful that Rivera had to be used. This one’s on Luis.

With 50,940 fans in attendance, this was the largest paid attendance in New Yankee Stadium history, regular season or playoffs. I’m guessing the suspension had something to do with that, I’m sure a few people hit up the secondary market Saturday morning.

MLB.com has the box score and video highlights, FanGraphs some other stats. 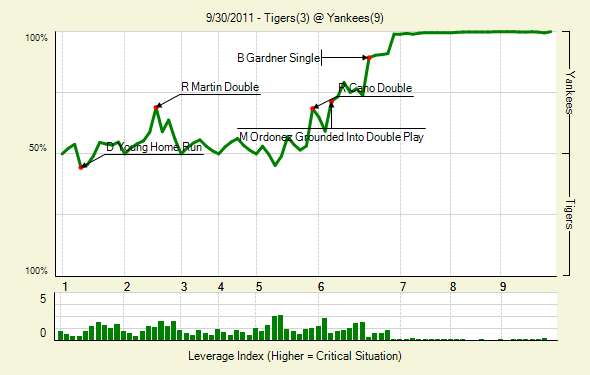 Sunday was supposed to be an off day, but these two teams will play Game Two of the series because of the rain. That one starts at 3:07pm ET, and will feature Freddy Garcia and Max Scherzer.