Over the next few weeks, we’re going to look back at what went right, what went wrong, and what went as expected during the 2011 campaign.

The Yankees somewhat surprisingly won 97 games during the regular season and finished with the best record in the American League, but they lost three of five to the Tigers in the ALDS to end their season. They outscored Detroit 28-17 during the five-game set, showing that when faced with a small sample, it’s not about how many runs you score, but when you score them. The Yankees posted the lowest ERA (3.27) among the eight teams during the LDS round, but they lost the three games by a total of four runs.

A number of things will typically go wrong whenever a team loses a playoff series, but nothing went more wrong for the Yankees than their supposed heart of the order. Alex Rodriguez, Mark Teixeira, and Nick Swisher, otherwise known as the 4-5-6 hitters, went a combined 9-for-55 with two doubles, one homer, seven walks, and 16 strikeouts. That works out to a .164/.266/.255 batting line and a .243 wOBA. All the other Yankees in the series combined to hit .305/.386/.466, roughly a .378 wOBA. It seemed like every time the Yankees had something cooking on offense, these three would come to the plate and almost immediately put out the fire for Detroit.

To get an idea of how awful A-Rod, Tex, and Swish were during the ALDS, just look at the players around them. Robinson Cano, who hit third in front of them, reached base nine times in the five games but scored just two runs, when he drove himself in on a pair of homeruns. Jorge Posada, who hit seventh behind them, had a monster ALDS (six hits and four walks), but he drove in a total of zero runs because no one was on base in front of him. The 4-5-6 hitters went a combined 1-for-13 with two walks and five strikeouts with runners in scoring position, and the most damning instance of their RISPFAIL came in the seventh inning of Game Five. With the bases loaded and one out, A-Rod struck out, Teixeira walks, and Swisher struck out to end the threat. It was the last time the Yankees would make any kind of sustained rally on the season.

The Yankees didn’t lose to the Tigers in the ALDS solely because of A-Rod, Teixeira, and Swisher, but they were certainly a significant contributor to the series loss. When your third, fourth, and fifth best hitters in the regular season (by wOBA) combine to hit like the corpse of Chone Figgins in the postseason, it’s going to be really tough to advance. Quality pitching, which the Yankees generally received in the ALDS, can only take you so far.

The “too many homers” narrative was one of the most common ones to the plague the Yankees this year, staring from game 1 (home runs from Granderson and Teixeira) and dragging all the way through the season. The Yankees eventually finished first in home runs with 222 and second in total runs with 867, meaning that roughly 25% of all the runs the Yankees scored were via the longball. While this seems like a lot, the fightin’ Baltimore Showalters had 191 home runs and 708 runs, pulling almost 30% of their runs from dingers. I guess that’s what happens when you employ Mark Reynolds. Yankees fans have spent most of the year making fun of this narrative and defending the team from it.

However, it was the long ball that both carried and sunk the Yankees in this short series. The right field short porch that has been so constantly vilified (but only when the Yankees hit homers in there), allowed Delmon Young, Miguel Cabrera, and Don Kelly to launch it out of the park. Two of those homers, Kelly’s in game 5 and Cabrera’s in game 2 would help sink the Bombers entirely. According to Hit Tracker Online, Delmon Young’s homer in the first part of game 1 would have been a homer in only one park: you guessed it, New Yankee Stadium. Cabrera’s was a homer in only two, while Don Kelly’s would have gone out in five different stadiums. Nick Swisher and Curtis Granderson (Game 2) both would have left the park in seven different stadiums, while Delmon Young (a la game 5), and Robinson Cano (both times) hit it big enough to go out in every park.

It would have been nice if the Yankees could have take advantage of their own homer-friendly park (and Derek Jeter certainly tried), but in lieu of that, a clutch hit would have helped, in either Comerica or New York. Could the Yankees not get the hits with runners in scoring position at the most unfortunate time this year?

Yankee Stadium Specials: 0 (You could argue Don Kelly’s was, but I’m going to say no.)
Yankees hits with RISP that weren’t homers: 1 (Cano, though this did not score a run)

It’s morbidly entertaining to me to see that another team can take advantage of a stadium feature that the team was constructed to use for their advantage, and then use it to thoroughly beat the Yankees. I’m not complaining about the short porch, just saying that it helps and harms in equal measure. The two runs Cabrera scored in game 2 were all that decided the game, and the tentative YS Special of Don Kelly’s dinger decided the series in the end. Plus, in Yankee Stadium, the Yankees went a total of 4-for-28 with runners in scoring position with a bases loaded walk, with only one of those hits being a home run (Cano), and one of them not scoring a hit at all. That really says it all.

PS: Does anyone have an official qualifier for what makes a Yankee Stadium Special? Footage? Exact row?

All good things must come to end, and the 2011 season came to an end for the Yankees on Thursday night. Johnny Wholestaff did his best to keep the Yankees in the game after Ivan Nova left with forearm tightness, but at the end of the day, the team couldn’t overcome numerous squandered opportunities on offense. The Tigers won 3-2, advancing to the ALCS.

The interweb was up in arms over Joe Girardi’s micromanaging following Nova’s quick exit, which involved the use of six different relievers to cover the final seven innings. The thing that no one seems to want to acknowledge is that it worked. Was it annoying? Hell yes. But it worked. After Nova allowed three hits – all for extra bases, including back-to-back homers by Don Kelly and Delmon Young – and two runs in his two innings of work, the sextet of Phil Hughes, Boone Logan, CC Sabathia, Rafael Soriano, David Robertson, and Mariano Rivera combined to allow just one run on five hits and two walks in seven innings. They struck out ten.

I saw plenty of fans and media members saying that Girardi was managing out of desperation, well guess what? It was a desperate situation. Starter went two innings (and put the team in a two-run hole before they even came to bat) before getting hurt in a win or go home game. How dare the manager express some urgency! It wasn’t a fun process to sit through, but given the circumstances, I thought Girardi (and the pitchers themselves, don’t forget those guys) did about as good a job as possible.

Story of the ALDS: Blown Chances

The story of the Yankees ALDS defeat will focus squarely on their 4-5-6 hitters, and rightfully so. Alex Rodriguez, Mark Teixeira, and Nick Swisher went a combined 9-for-55 (.164) with seven walks and one hit-by-pitch (.266 OBP) in the five-game series, and their inability to put the ball in play in a bases loaded, one out situation in the bottom of the seven essentially sealed the Yankees fate (in fairness, Tex did walk to force in a run). A-Rod and Swisher both struck out feebly against a struggling Joaquin Benoit to kill the rally.

Earlier in the game, the Yankees had the bases loaded with one out against Doug Fister in the fourth, but Russell Martin and Brett Gardner couldn’t hit the ball out of the infield. Martin popped up to first, Gardner to third. Fister retired seven of the first eight men he faced, but once the lineup turned over, he allowed five of eight hitters to reach base and I thought the at-bats were noticeably better and the contact noticeably harder. The Yankees scored zero runs until Robinson Cano’s fifth inning solo homer, though.

New York outscored Detroit 28-17 in the five games, but the distribution of runs was the issue in the five-game series. The Yankees won both of their games by six runs or more, and lost the three games by four runs combined. They went 2-for-9 with men in scoring position and left eleven men on base Thursday, and the two hits didn’t even score runs. The Tigers went 1-for-9 with men in scoring position and stranded just six thanks to the stellar bullpen work, but the two first inning solo homers gave them a lead they’d never surrender.

The bases loaded situation in the seventh was the Yankees last real gasp at a comeback, but Derek Jeter just narrowly missed a go-ahead two run homer in the bottom of the eighth. It looked like Don Kelly caught it right at the top of the wall in right from where I was sitting, but I haven’t seen the replay so don’t take my word for it. Another foot or three, and this is a very different recap.

Very nice job by Soriano out of the bullpen this series. He retired 13 of the 14 batters he faced, but unfortunately the one was Young’s game-winning homer in Game Three. Boone faced eight batters in the series, allowed one ground ball single, and struck out six. David Robertson and Mariano Rivera retired all eleven men they faced in the series, and didn’t allow a single ball out of the infield. The pitching staff wasn’t the problem here, the guys combined for a 3.27 ERA with 47 strikeouts and just 36 hits allowed in 44 innings during the five-game set.

MLB.com has the box score and video, FanGraphs some other stuff. 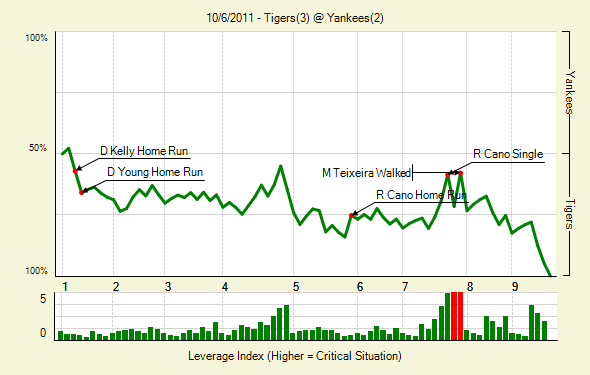 Unfortunately, a lot of Yankees-less nights are next. The four-and-a-half month offseason officially begins today, and the Yankees have to deal with Brian Cashman’s expiring contract before anything else takes place.

After 167 games, the season is over for the 2011 Yankees. The Tigers knocked them out of the postseason with a 3-2 win in Game Five tonight, even though the Yankees had a myriad of chances to tie the game or do even more. The full recap will be up eventually, but vent here.

Here’s another thread to keep things going. Thanks for your help keeping the site moving. Enjoy.

Here’s another thread, so please move the discussion here so the site doesn’t crash. Thanks.

Remember, these are coming every hour, on the hour to help keep the site moving. Please keep the discussion going here. Much appreciated.