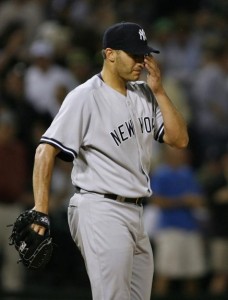 Later on tonight, Andy Pettitte will make his final start of 2009, for better or worse. As you know, he’ll be working on three days’ rest for the first time since 2006, and many fans are concerned about how the 37-year-old will rebound on short rest. While his stats on three days’ rest are pretty good (3-1, 2.80 ERA in five career short rest starts in the playoffs), the data is so old and not indicative of anything that it might as well be recorded in hieroglyphics.

Instead of relying on those numbers, let’s take a look at how Pettitte fared on normal four days’ rest following what I’ll call “high stress outings” in 2009. By “high stress outings,” I mean starts in which Andy threw a lot of pitches while allowing lots of baserunners in not many innings. Think 5.1 IP, 9 H, 4 R, 3 BB kind of outings. Then, by looking at how he performed four days later, it’ll give us an approximation of what Pettitte will do tonight. It’s obviously not a perfect comparison, but it’s better than pretty much anything else we have right now.

Game Three over the weekend wasn’t kind to Andy, but he battled through six innings while putting eight men on base and letting four runners cross the plate. He threw 104 pitches, so it would definitely be considered a “high stress outing.” Let’s see how Pettitte rebounded from similar starts this year.

I was going to break it down start-by-start, but after recapping the first one, I gave up because all I would be doing is giving too much credit to the already small sample size. It wasn’t worth the time.

So anyway, that’s six instances this season when Andy really had to work hard to get outs, then had to come back and pitch four days later. In those six follow-up starts, Pettitte averaged 6.1 IP, 6.2 H, 2.5 BB, 3.7 R, 102.2 pitches, +0.05 WPA, which is not great, but it’s certainly serviceable. The good news that with exception of that July 1st start against the Mariners, all of the follow-up starts came against good offensive clubs, so the data isn’t too skewed.

Pettitte’s average start this year was 6.1 IP, 6.0 H, 2.4 BB, 3.2 R, 103 pitches, +0.05 WPA, which is ridiculously close to his average in those follow-up starts. The biggest difference is that he allowed half a run more following a real tough outing, which is probably just a BABIP thing since the number of baserunners and innings pitched are nearly identical. I have to say, I’m somewhat surprised by the results.

Of course, these starts come on regular four days’ rest in the middle of the season, not three day’s rest after Pettitte already has 219.2 IP on his left arm. We can arbitrarily dock him an inning and tack on another run, meaning we should expect 5+ innings and about 5 runs tonight, but that’s nothing more than guesswork.

What I wanted to see with this post is how Pettitte rebounded after a taxing start, and as you can see above, he generally didn’t suffer any sort of hangover. It’s far from a perfect analysis, but it’s much better than just assuming he’ll do bad for no other reason than because you have a bad feeling about it.