Throughout the 2011-2012 Hot Stove season we have frequently looked ahead to next offseason, with its presumed bumper crop of studly free agent pitchers, including (at the moment) Cole Hamels (age 29), Matt Cain (28), Zack Greinke (28), Francisco Liriano (29), Shaun Marcum (31), Brandon McCarthy (29), Anibal Sanchez (29), and Jonathan Sanchez (30). A handful of attractive names — James Shields (31), Gavin Floyd (30), Dan Haren (32) and Ervin Santana (30) — have club options, but said options are mostly reasonably priced and it seems unlikely that any of that quartet would be bought out.

Prior to the Big Trade, it was generally expected that the Yankees would be all over Hamels should he make it to free agency, and rightly so, as it’s not every offseason an elite left-hander makes it to the open market. The case for Hamels is a no-brainer: Since breaking into the league in 2006, Hamels is tied for the 13th-most valuable pitcher in all of baseball, producing a stellar 3.39 ERA/3.63 FIP/3.42 xFIP line over 1,161.1 innings with a beautiful 8.45 K/9 and 2.26 BB/9. The only left-handers ahead of him on that list are CC Sabathia and Cliff Lee.

So unless Phillies’ GM Ruben Amaro somehow convinces Hamels to take a way-below market extension a la Jered Weaver — and it’s extremely difficult to envision this happening, as the numbers suggest Hamels could very well be in line for a $161 million CC Sabathia-type deal — or is able to convince Phillie ownership that they can indeed afford another $100 million-plus pitcher, next offseason’s pursuit of Hamels will likely rival both last winter’s Lee sweepstakes and the 2008-2009 Sabathia drama as one of the craziest ever. However, in the aftermath of the Montero-Pineda deal, an additional wrinkle has been thrown into the mix, namely whether the Yankees determine they can afford to add Hamels in light of all the talk of an austerity budget.

While I personally feel the Yankees would be nuts not to do whatever it takes to land Hamels, if they do decide the lefty is too pricey or doesn’t even end up becoming available, there’s another, arguably slightly better, younger (and perhaps most importantly, presumably slightly cheaper) option that seems an even surer bet to reach free agency next winter, and that’s former Cy-Young-award-winner Zack Greinke. While the lefty Hamels has commanded much of the attention, Greinke’s future availability seems to have gone somewhat overlooked, and so I thought I’d point out why he should be just as much of a Yankee target as Hamels, if not moreso.

For one, on that aforelinked list of most valuable pitchers since 2006, Greinke is above Hamels, checking in at 7th with a 3.41/3.14/3.39 pitcher triple slash in more than 200 fewer innings than Hamels along with a sterling 8.68 K/9 and equally drool-worthy 2.33 BB/9. Of those top 30 pitchers, the only hurlers with a higher K/9 are Tim Lincecum, Clayton Kershaw and Jake Peavy, and the latter hasn’t been at that level since 2009. The only ones with superior FIPs are Lincecum, Roy Halladay and Josh Johnson.

This past season, Greinke — always a strikeout-heavy pitcher — upped his game to levels of even more ridiculousness, leading all of MLB with a career-high 10.54 K/9. His 2.98 FIP was 9th in the league, while his 2.56 xFIP was first. These are big boy numbers, and the only reason you likely didn’t hear more about Greinke’s huge year was because he started the season injured and was also betrayed by his defense, as his 3.83 ERA was fueled in part by the second-highest BABIP (.318) of his career that helped fuel the third-lowest strand rate (a below-league-average 69.8%) of his career.

The following chart helps underscore just how good Greinke has been since breaking into the league full-time in 2004 (as always, click to enlarge): 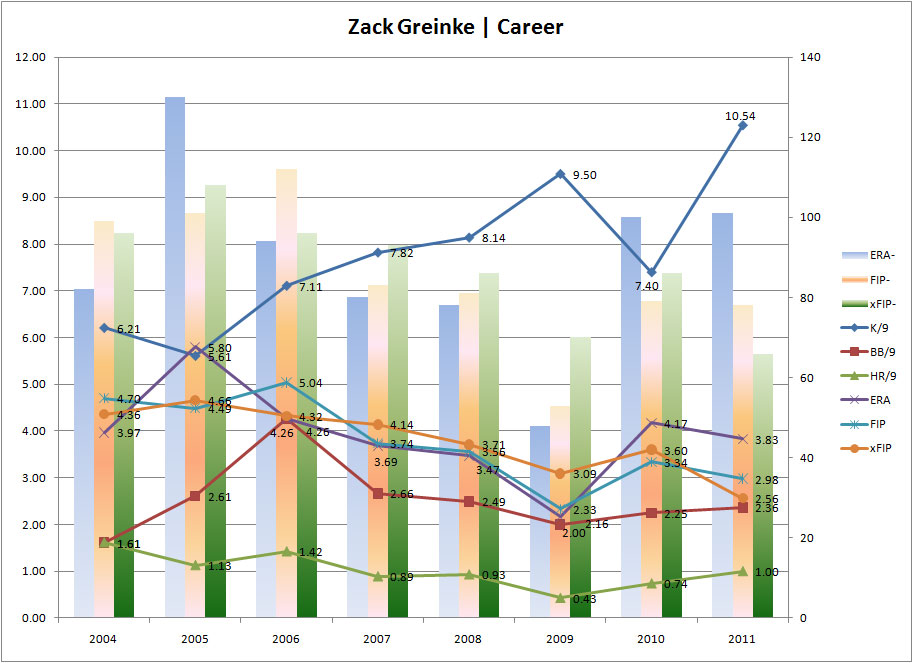 An increase in K/9 every season save one? That’ll do nicely. As he’s matured as a pitcher, Greinke also brought his GB% rate up from the mid-30%s to a career-high (and above-league-average) 47.3% in 2011. Given Greinke’s dramatic improvements on what had already been several very good pitching performances, I was also curious to take a look at his stuff: 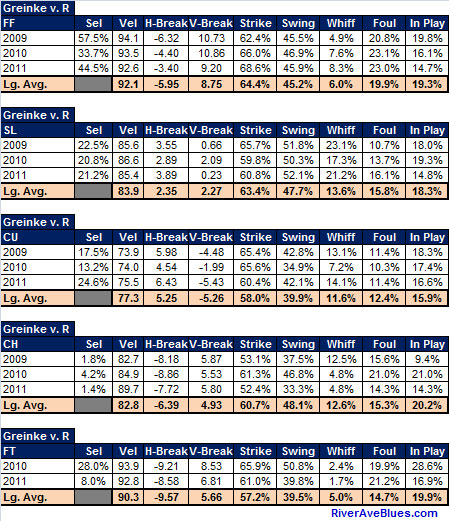 Greinke has three legitimate weapons against righties in his four-seamer, slider and curveball, each of which generate above-average Whiff rates. Somewhat unexpectedly, Greinke’s heater has lost about 1.5mph since 2009, although this hasn’t seemed to hinder its effectiveness, as his Strike% and Whiff rate has improved in each successive year, while his In-Play% is on a three-year decline. It’s helpful to know that Greinke doesn’t need to be routinely dialing it up to 94mph to be successful with the heat, although it’ll be important to keep an eye on that velocity this coming season to see whether it takes another dip.

Greinke doesn’t really throw his change to righties, and per the PITCHf/x data he appears to have added a two-seamer in 2010, although again, given the myriad classification issues that frequently arise when analyzing this data, it’s possible there are some four-seamers being misclassified. Although the extremely low Whiff rates on the two-seamer would seem to indicate that this pitch is indeed a sinker. He went from throwing it nearly 30% of the time to batters on both sides of the plate in 2010, to under 10% of the time last season — I’m not sure what to attribute the decrease to, as the sinker appears to have helped him generate more grounders, but perhaps it’s as simple as Greinke wanting to further diversify his arsenal. 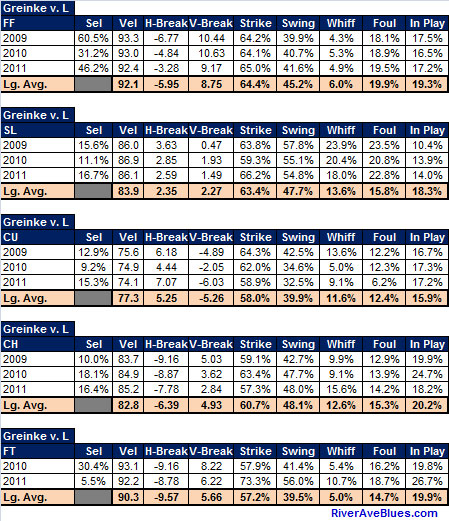 As you might expect, Greinke’s Whiff rates aren’t quite as robust against lefties, though they’re still plenty high. What he’s missing in four-seamer Whiff% he more than makes up for in Changeup Whiff%.

In sum, we have a pitcher who misses a ton of bats, has a knockout slider to complement his blazing fastball, and who also appears to have added a two-seamer/sinker to his repertoire to help spike his ground-ball rate. So essentially, Zack Greinke is a right-handed, younger version of CC Sabathia. I think we’d all happily sign up for that.

Of course, the elephant in the room is Greinke’s social anxiety disorder. I’m not a psychologist nor do I have any way of quantifying how his mental state might impact his performance, though it’s been speculated by many that Greinke may not have the intestinal fortitude to flourish under the microscope on the biggest stage in the world in the Bronx. Brian Cashman essentially echoed that sentiment during last offseason as the Yankees passed on acquiring Greinke via trade, despite the pitcher’s apparent protestations that he was indeed cut out for and eager to pitch in New York.

Even if the Yankees — and presumably, other teams — have concerns over Greinke’s head, the fact that the cost of acquiring him is just money and not prospects should help ease some of the worry. It also may help knock his price down. While the numbers indicate Greinke should probably be paid as though he were CC Sabathia, the questions about his make-up may hinder him from reaching that financial plateau. If Greinke can be had for, say, $108 million over six years ($18 million per is probably a conservative estimate) however, his market could end up depressed if GMs are afraid to pay him like an elite pitcher due to any lingering fears about SAD. Per FanGraphs’ much-derided $/WAR calculation he’s been worth an average of $25.6M per season since 2008), I don’t see any rational reason for the Yankees not to run with that deal all the way to the bank.