When Christian Lopez decided to give Derek Jeter the ball from the Yanks’ short stop’s 3000th hit in exchange for Yankee schwag,, Lopez, as we discussed yesterday, may have inadvertently incurred a decent amount of tax liability on top the $100,000 in outstanding student loans he owes. Today, we learn that this story has a happy ending. As ESPN New York reported, Modell’s and Miller High Life have both offered to help out. The beer company said they would cover Lopez’s tax liability while Modell’s said a portion of sales of Yankee merchandise would help offset Lopez’s loans as well. Furthermore, as NBC’s Bruce Beck noted, Brandon Steiner and Mitchell Modell both guaranteed $25,000 for Lopez’s loan repayments as well. Good deeds sometimes do get rewarded.

Christian Lopez found himself a lucky guy on Saturday afternoon. His tickets were a gift, and he found himself in the right spot as Derek Jeter improbably and majestically launched a home run into the left field seats for his 3000th career hit. The ball — a potential $200,000 lottery ticket that could help pay off Lopez’s $100,000 student loans — was his.

Of course, Lopez decided instead to do what he felt was the right thing. He gave the ball back to Derek Jeter in exchange for some signed balls, bats and jerseys and four season tickets in the Champions Suites. Now, as The Times noted last night, he probably owes taxes on those items.

“There’s different ways the IRS could try to characterize a ball caught by a fan in the stands,” Andrew D. Appleby, a tax lawyer who specializes in prized baseballs, said to The Times. “But when the Yankees give him all those things, it’s much more clear-cut that he owes taxes on what they give him.”

Now, this story has made the rounds today, and people are outraged! How could the Yankees let Lopez incur more debt for his generosity? Now, of course, it’s not that simple; when it comes to the tax code, it never is. Lopez would have owed taxes on the any amount of money he received from the ball, and the Yankees can certainly cover Lopez’s taxes as well. Second, if the items given to Lopez from the club are gifts — given out of generosity and not because Lopez wanted them in exchange — he wouldn’t be taxed on them. The IRS would bill him for the jerseys and balls but not the seats.

Ultimately, the story isn’t as scandalous as it has been made out to be today. The Yanks could cover Lopez’s taxes or he’ll owe less than is being reported or he’s just paying taxes he otherwise would have owed had he chosen to sell the ball. Such are the pitfalls of winning the lottery.

But the story still got me thinking: What would I do had I caught the lucky Number 3000? As powerful as karma — or at least the good feelings associated with it — might be, it’s hard to resist the allure of easy money. And so let me open the floor to you. What would you do? Be honest.

If you caught Derek Jeter's 3000th hit, what would you do with the ball?

As Derek Jeter returns home tonight sitting on 2997 hits, the Yankee captain appears destined to join the exclusive 3000-hit club this weekend before the All Star Break, and the marketing frenzy is hitting overdrive. Secondary ticket prices are through the roof (and you can find whatever deals remain on RAB Tickets) while Jeter’s promotional partners are building hype too.

This afternoon, Jordan Brand e-mailed us about a series of items designed as part of their DJ3K collection. On the field, Jeter will be sporting special spikes and batting gloves while Jordan Brand is also releasing a sneaker. For the fans who want merchandise, the t-shirt above will on sale at all major sporting goods stores for $25 once he reaches the milestone. A blue version will be on sale as well.

Furthermore, don’t forget to enter our own DJ3K contest. The details are available in this post, but the short of it is simple: Become a fan of RAB Tickets on Facebook and enter, before the first pitch tonight, with a prediction of the game, the inning and count of Jeter’s 3000th hit. The winner will get two tickets to a sporting event of their choice courtesy of TiqIQ.

Despite Jeter’s status as a lightning rod for controversy and criticism this year, the next few days should be a lot of fun in the Bronx. No one has ever reached 3000 hits as a Yankee, and we shouldn’t lose sight of that accomplishment. As ‘Duk wrote at the Big League Stew today, let’s enjoy it. 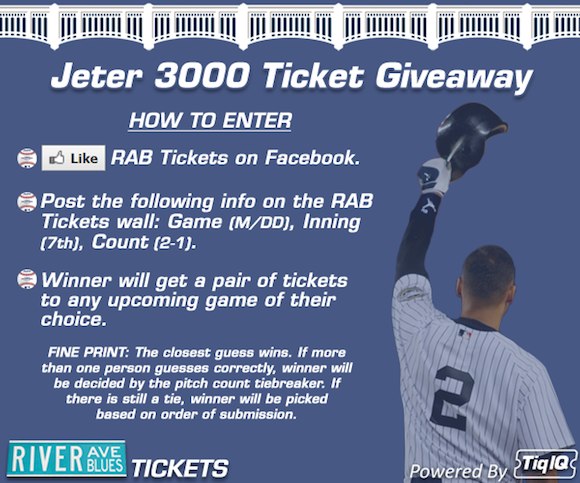 As Derek Jeter slowly inches his way toward his inevitable 3000th hit, River Ave. Blues and our partner TiqIQ are hosting a contest to celebrate the milestone. The winner will get two tickets to a sporting event of their choice courtesy of TiqIQ.

So how to enter: First, readers will have to head on over to Facebook and “like” RAB Tickets. Then, post on the RAB Tickets Facebook wall a guess for Jeter’s 3000th hit that includes the date, the inning and the count of the at-bat on which Jeter will reach that milestone. If more than one person guesses correctly, winner will be decided by a pitch count tiebreaker. If there is still a tie, winner will be picked based on order of submission.

If you’d like to get a sense of how the secondary ticket market is responding to Jeter’s quest, take a look at this graphic. It looks like most buyers think Jeter will reach 3000 at home this weekend on either Friday or Saturday. Personally, I’m betting on Friday, but that’s because Joe, Mike and I are all going to be at the stadium that evening.