Got four questions with some pretty long answers today, so this is a hefty mailbag relative to most weeks. Please use the Submit A Tip box in the sidebar to send us anything throughout the week, mailbag questions or another.

When the Indians agreed to sign Michael Bourn earlier this week, the first thing pretty much everyone seemed to think was that either Michael Brantley or Stubbs were trade bait. Manager Terry Francona shot that down by saying they plan to play Brantley, Bourn, and Stubbs in the outfield with Nick Swisher at first base and Mark Reynolds at DH, but a trade should never be ruled out. Jon Heyman says the team is getting calls about its spare outfielders.

I wrote about the 28-year-old Stubbs early in the offseason, before the Reds traded him to the Tribe as part of the Shin-Soo Choo-Trevor Bauer deal. He was awful overall last season — 64 wRC+ with a 30.5% strikeout rate — but he continued to hit left-handers (111 wRC+) while providing plenty of value on the bases (30+ steals in three straight years) and in the outfield. Rather than rehash everything here, I suggest clicking the link and reading the previous post for the gory details. The short version is that I wouldn’t use him against righties at all but would everywhere else.

Cleveland signed Stubbs to a one-year, $2.825M contract last month, and he remains under team control as an arbitration-eligible player through 2015. I’d be all over him for the right-handed bench bat role if I was the Yankees, mostly because he’s affordable and will produce just as much against lefties as Juan Rivera and Matt Diaz while contributing far more outside the batter’s box. He’d give them a right-handed platoon bat and a late-inning pinch-runner. I don’t know what the Indians would seek in return, but if they’d take a depth arm like Adam Warren or a miscellaneous prospect like Corban Joseph, I’d be all over it.

END_OF_DOCUMENT_TOKEN_TO_BE_REPLACED 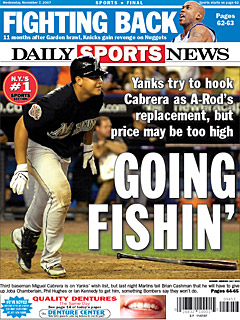 Four years ago this month, Alex Rodriguez opted out of the final three years of his contract, and at the time Brian Cashman was adamant the Yankees would not re-sign him. “How can we?” said the GM. “We lose all our money from Texas.” A-Rod was owed $72M during the remaining three years of the deal, but the Rangers were responsible for $21.3M of that. As soon as he opted out, Texas was off the hook.

A few weeks later, Hank Steinbrenner went over Cashman’s head and inked the reigning AL MVP to another ten-year contract. In between the opt-out and the re-signing, there were plenty of rumors about who the Yankees were targeting as their next third baseman. I remember talking about Wilson Betemit playing full-time, Miguel Tejada, Scott Rolen, Ryan Zimmerman (the next big thing at the time), you name it. One player that was both on the market and a trade target of the Yankees was Miguel Cabrera, who just helped the Tigers past the Yankees in the ALDS. This four-year-old Mark Feinsand column has the details…

Brian Cashman met with the Marlins at about 6 p.m. last night at the GM meetings. No offers were made, but a source with knowledge of the situation said the Marlins made it clear that the Yankees would have to include either Phil Hughes, Joba Chamberlain or Ian Kennedy in any trade for Cabrera, something the Yankees are not willing to do.

The Yankees would likely offer a deal involving their next tier of prospects, which includes Alan Horne, Humberto Sanchez, Ross Ohlendorf and Jose Tabata.

“The Marlins have evidently let it be known that he’s available, so we’re looking into it,” Hank Steinbrenner said. “But everything is really very preliminary.”

Joe Girardi had just been hired as Joe Torre’s successor, and he had managed Cabrera during his lone season at Florida’s helm. “I didn’t have any problems with him,” said the skipper. “I had him and I know what he did for me. He’s a great player and a smart player. He really understands the game of baseball. I loved having him.” Cabrera was just 24 at the time, and was coming off a .402 wOBA season, his third straight over .399. He was getting super expensive through arbitration, and the tight-walleted Marlins just couldn’t afford him.

We were in the middle of our “Save The Big Three” campaign back then, but that had nothing to do Miggy Cabrera. It was all about Johan Santana. We didn’t want to Yankees to trade any of Hughes, Joba, or IPK for Johan simply because there was just one year left on his contract and he’d shown signs of decline the previous year. For Cabrera, an elite hitter still yet to reach his prime, I’m sure we would have felt differently. I know I would have.

Cabrera (and Dontrelle Willis) eventually went to Detroit for a six-player package highlighted by Andrew Miller and Cameron Maybin, an offer the Yankees likely could have matched. Baseball America ranked Maybin and Miller as the sixth and tenth prospects before the season, respectively, while Hughes and Tabata were fourth and 27th, respectively. The rest is just filling in the blanks. The question is: what would happened next?

Of course, Cabrera was a third baseman in name only. He lasted just a year-and-a-half at the hot corner for the Tigers, so chances are Mark Teixeira would not be a Yankee either. Is Adrian Beltre playing third base? Casey Blake? Derek Jeter? Jose Bautista? If Hughes and Tabata get traded, that means the Xavier Nady-Damaso Marte deal looks very different, perhaps involving Austin Jackson instead. Jackson to the Pirates means no Curtis Granderson, since a condition of the Tigers dealing their center fielder was that they got a young center fielder in return. Would a Cabrera trade have meant that Ian Kennedy would still be a Yankee with Brett Gardner in center?

We could spend all day dreaming up scenarios, but it’s worth mentioning that as great a hitter as Miggy is, he’s not without his demons. He’s had three separate alcohol-related run-ins with the law; one involving an argument with his wife, one involving some strangers at a restaurant, and another when he got busted for DUI. I’m not sure how that would have gone over with the media hounds we have here in New York, but who knows how things play out in the first place. A trade changes everything, it changes career paths and it changes lives.

It’s easy to sit here and say the Yankees should have traded Hughes and whoever else for Cabrera given what we know now, but it’s never that simple. Miggy in pinstripes could have meant no 2009 World Series, or it could have meant multiple championships.  The only thing I’m pretty sure of is that he would have raked, raked and raked and raked in a much friendlier ballpark than the one he’s playing now. It’s the great what if, the question we can’t answer but can enjoy debating.

When Miguel Cabrera stepped to the plate with a runner on second and two outs in the third inning last night, we all knew he was going to get a hit and drive in the run. Maybe some were in denial, rationalizing that Colon had been money and would retire him. But deep down in our bones we all knew it. That’s just what Miguel does. Since he arrived in the AL for the 2008 season he has the second highest wOBA in the league, .405, just five points behind Kevin Youkilis. It seems like he’s that much better against the Yankees.

Even when Cabrera wasn’t killing the Yankees, he was still killing the Yankees. While he was just 5 for 24 in the 2003 World Series, his one extra base hit put the Yanks in a hole. They had everything set up. Up two games to one, they had Roger Clemens on the mound to set up the Marlins for defeat. But Cabrera hit a two-out, two-run homer that sent the Marlins to an early lead. While the Yanks did come back, they lost in extra innings, and didn’t win a game the rest of the series. While we all remember that game for Alex Gonzalez’s 11th inning homer, it might have been Cabrera’s that turned the series.

Because he played in the NL, Cabrera didn’t get many chances to wreak havoc on the Yankees from 2004 through 2007. The Yanks and Marlins did do battle in 2006, though, and in that series Cabrera went 5 for 10 with a double, a homer, and two walks. No one was sad to see he and the Marlins leave Yankee Stadium that June, but the possibility still hung out there. The Marlins, renown for their cheapness, would find Cabrera’s salary unpalatable at some point. There was a decent chance he would be AL bound.

In fact, there was something of a chance that he would be headed to the Yankees. After the 2007 season it became clear that the Marlins would deal Cabrera during the off-season. For the previous two seasons he had been the Marlins third baseman, and the Yankees suddenly had an opening at the position. Alex Rodriguez had opted out of his contract, and Brian Cashman had been on record saying that the Yankees would not re-sign their superstar. With Wilson Betemit as the only in-house option, the connection to Cabrera was immediate. But the Yankees had bigger problems — pitching problems — and probably weren’t going to meet the Marlins asking price. It’s doubtful that they could have matched Detroit’s package of Andrew Miller and Cameron Maybin, two of the top prospects in the game.

Thankfully, the rest of the Detroit team has taken mercy on the Yankees in the past two years. Without Cabrera they’ve hit .233/.279/.369 in 391 PA against the Yankees. But every time Miguel steps to the plate, it induces fear in my heart. I know that even if he’s not going to get a hit, he’s going to hit it hard somewhere. That fits the bill for a Yankee killer. Welcome to the club, Miguel.

The Tigers are set to acquire masher Miguel Cabrera and the perpetually over-rated Dontrelle Willis from the Marlins for uber-prospects Cameron Maybin and Andrew Miller, as well as four others. For what it’s worth, RAB’s inside guy at the Winter Meetings said the rumor is legit and a deal is imminent.