The team’s focus will likely be on pitching at the trade deadline in the wake of Masahiro Tanaka’s elbow injury, but they can’t forget about the offense either. They average only 3.99 runs per game, one-third of a run below the AL average. They’re getting below-average production from every position other than left field, center field, and first base, but they are unable to make changes at some spots due to contract status, iconic status, etc.

Right field and third base are the easiest positions for the Yankees to upgrade. They’re shaken things up a bit by cutting ties with Alfonso Soriano and giving Zelous Wheeler a chance, but that has had negligible impact. The Yankees will need to make a trade (or two) to improve their run-scoring, and one of the teams that will be a seller at the deadline is the Padres, who are currently between GMs. That complicates things. Last week we looked at their pitchers, now let’s look at their position players.

3B Chase Headley
Over the last three weeks or so we’ve heard the Yankees are both “regularly” scouting Headley and not strongly pursing him. Both are probably true. The Padres are terrible and Headley is an obvious trade candidate, so the Bombers have to do their due diligence and get some eyes on him. They don’t have to be knocking down the door trying to trade for him at the same time either.

“Even when things are going full-on crappy, like now, I’m confident that sometime in the near future, I’m going to get healthy, stay healthy and start playing the way I know I’m capable of,” he said to Chris Jenkins recently. “I don’t look at it like, ‘Man, I gotta get out of here to be me again.’ I’m going to be me again, whether it’s here or somewhere else.”

Headley’s struggles this year are not all ballpark related, however. Obviously his back was acting up at some point and that likely hurt his performance. How could it not? He is hitting fewer ground balls this season — 40.3% compared to 46.1% last year and 45.1% career — and the average distance of his batted balls in the air is down a bit from recent years. From Baseball Heat Maps: 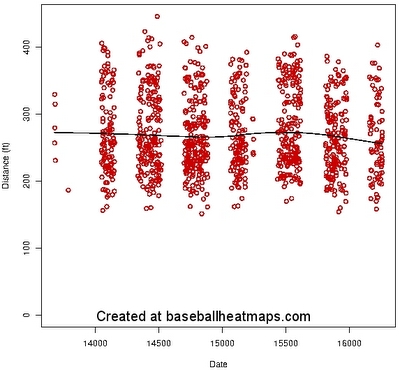 That seems like something that could be explained by the back issues. Headley’s plate discipline numbers are right in line with his career norms and his numbers from both sides of the plate are down as well, so it’s not like he’s been fine as a lefty and brutal as a righty or something like that. Headley isn’t hitting the ball as far (and thus as hard) as he did the last few seasons, which could be attributed to the back injury or something else entirely, like a swing or mechanical problem. It could be both.

On the surface, Headley is a great fit for the Yankees as a switch-hitter with some power and a lot of patience from both side of the plate. He has also consistently graded out as an above-average defender at the hot corner, so he’s a true two-way player. That’s not who Headley is right now though, at least not at the plate. He hasn’t hit this year at all, and while the last few weeks have gone better, that’s not enough to erase three pretty terrible months.

The Padres missed their best opportunity to trade Headley following that huge 2012 campaign. He is due to become a free agent after the season and has about $5M still coming to him in the second half. I can’t imagine the Padres will give him a qualifying offer after the season — the qualifying offer is expected to be north of $15M this winter, and after what happened with Stephen Drew and Kendrys Morales, I think Headley would accept it in a heartbeat — so it won’t require a ton to get him in a trade. Nothing as valuable as a first round pick, obviously.

The list of rental hitters traded in recent years includes Kevin Youkilis and Shane Victorino, both of whom were once productive players going through disappointing seasons mired with injury concerns. Youkilis netted the Red Sox two fringe big leaguers (Zach Stewart and Brent Lillibridge) and salary relief while Victorino brought the Phillies a fringe big leaguer (Josh Lindblom), a middling prospect (Ethan Martin), a non-factor player to be named later, and salary relief. Seems like decent framework for a Headley trade, no? He is very much available and I don’t think the Yankees would have much trouble actually acquiring him. The question is whether he will produce in the second half.

OF Carlos Quentin
One of the many reasons the Padres can’t seem to get out of the gutter are their failed contract extensions. Guys like Cameron Maybin, Cory Luebke, Nick Hundley, and Jeff Gyorko simply haven’t lived up to expectations either due to poor performance or injury. Quentin belongs in that botched extensions group as well, though he was already a veteran and established when San Diego gave him four years and $37M three years ago.

The Yankees have zero right-handed power on the roster right now — their right-handed hitters have hit 16 (!) homers all season — and Quentin would provide that, at least in theory. He has always been a patient hitter who draws a healthy amount of walks (10.2% from 2012-14) and gets on base, which is something the Yankees lack in general as well. Quentin has zero base-running value and he’s more or less a DH who can play the outfield, so if he doesn’t hit, he’s useless.

Unlikely Headley, Quentin would not be a rental. He is owed roughly $4.5M through the end of the season plus another $8M next season. Unless the Padres eat a bunch of money like the Cubs did with Alfonso Soriano last year, I’m not sure Quentin is someone the Yankees want on their roster despite their need for righty pop. He should come cheap as a salary dump player, but there is no room for a defensively challenged, injury prone player on the roster.

Outfielder Seth Smith would have been the best fit for the Yankees as a left-handed power-hitter for right field, but San Diego gave him a two-year contract extension two weeks ago. Jon Heyman says the Padres told Smith he will not be traded following the extension, so forget about that. He is hitting .283/.387/.508 (155 wRC+) with ten homers and would have been a wonderful fit as a rental right fielder. Too bad he’s off the table now.

Aside from the prospect of buying super low on Headley and hoping he rebounds in the second half, the Padres don’t have many quality position players to offer in a trade this summer. I’m guessing they would move Quentin today if some team was willing to take on his contract, and neither Denorfia or Venable are impact players even when they’re at their best. They’re just quality role players. If the Yankees can get Headley for a Youkilis or Victorino-esque package, they should be all over him. Other than that, there aren’t many reasons to call San Diego this trade season.