The Twins and Yankees had a very one-sided rivalry in the mid-to-late-aughts, a rivalry that included four ALDS matchups from 2003-2010 and two wins by Minnesota. Not series wins, individual game wins. New York took all four of those ALDS meetings by a total of 12 wins to two.

The Twins have run off a pair of 95+ loss seasons since last getting bounced from the postseason by the Yankees, so they’re in something resembling a rebuilding phase. I say “something resembling a rebuilding phase” only because they’re still signing free agents and trying to piece together a contender given their weak division, yet they’re still closer to another 95-loss campaign that a playoff berth.

If Minnesota does decide to commit to a rebuild this winter (unlikely but possible), they would have several pieces of interest to the Yankees. I’m not talking about Joe Mauer, whose contract is prohibitive and days behind the plate are numbered, or even Ryan Doumit, who just signed a contract extension. Yesterday I wrote about utility man Jamey Carroll, now here are two outfielders who might fit in New York…

Josh Willingham
When you hit .260/.366/.524 (143 wRC+) with 35 homers and a 12.4% walk rate, you’re going to generate some buzz like the soon-to-be 34-year-old Willingham did this season. The Twins reeled him in with a three-year contract worth $21M last offseason, a deal that sure looks like one of the biggest bargains of the winter at this point.

The Yankees need to replace Nick Swisher and Willingham is one of the few outfielders who can provide similar offensive production. This year was a career year for him and I don’t expect him to repeat it, but he still hit .257/.360/.476 (127 wRC+) with an average of 23 homers per year from 2009-2011. He’s consistently offered power (.233 ISO since 2010) and patience (12.2 BB%), plus his right-handed bat would help balance out a lineup short on righty power given Alex Rodriguez’s decline.

Willingham, however, is an atrocious defensive outfielder who has only gotten worse following 2010 knee surgery. His best position is probably first base or even DH at this point. You’re also getting nothing on the basepaths and usually a stint on the DL at some point during the season as well. His value stems exclusively from his bat, but luckily for Willingham he can really hit.

Denard Span
The 28-year-old Span is generally considered to be more attainable than Willingham because the Twins already have his center field replacement lined up — Ben Revere put together an 88 wRC+ and stole 40 bases while playing stellar defense this summer. Span is signed to a long-term contract that will pay him $4.75M next year and $6.5M the year after before a $9M club option ($500k buyout) comes into play for 2015. For luxury tax purposes, the average annual value is a friendly $3.3M.

The concern for the Yankees is that Span is basically Brett Gardner with half the stolen bases and half the called strike threes. He broke out during the 2008-2009 seasons (119 wRC+ in 1,087 plate appearances) but has hit just .271/.334/.397 (95 wRC+) in 1,584 plate appearances since. Concussion and shoulder problems have hampered him the last two years and could be to blame for the declining offense, but he was perfectly healthy in 2010 and still managed an 89 wRC+ in over 700 plate appearances.

What Span does provide is crazy good contact skills from the left side (10.9 K% and 92.0% contract lasts three years) and some patience (8.5 BB%) to go along with dynamite defensive ability. He ranks ninth in UZR (+21.9) and tenth in DRS (+24) among all outfielders over the last three seasons, but he hasn’t played anywhere other than center since 2009. Although it would create a stellar defensive outfield, Span and Gardner are completely redundant. The Yankees would be lucky to get ten homers out of the duo combined.

One of the oddest trade discussions to (reportedly) take place in recent years involved Span and the Nationals at last year’s deadline, when the Twins were willing to trade him for a reliever (Drew Storen) but Washington haggled over which reliever (offered Tyler Clippard instead). Given their lack of a long-term center fielder, it seemed like an easy call for the Nats. I highly doubt the Yankees would be lucky enough to pry Span away with just a reliever now that Minnesota has revamped their bullpen (3.77 ERA and 4.09 FIP in 2012), but even if they wanted to replace Swisher with a contact-and-speed, defense-first outfielder, they’d probably just re-sign Ichiro Suzuki. They know him and it would only cost money.

Willingham is a different case since the only free agent outfielders who could match his offensive production are Josh Hamilton and Swisher. Normally bringing a dead pull right-handed hitter to Yankee Stadium would give me pause, but Willingham has the kind of power to overcome Death Valley in left-center. I’m not too concerned about that with him. Considering his luxury tax friendly contract (just $7M average annual value through 2014), maybe the Yankees have to overpay a bit to get the production they need at affordable rates. The Twins appear to be very disinclined to move him however, so chances are this is all moot.

Via Jon Heyman, the Yankees have checked in with the Twins about the availability of Denard Span. Minnesota is unsurprisingly “asking for a ton.” The Yankees will be without Brett Gardner for the rest of the season and Nick Swisher recently went down with a left hip flexor, so the outfield is thin. Heyman reiterated that New York looked into both Shane Victorino and Justin Upton, which is old news.

Span, 28, is a very similar player to Gardner. He’s a left-handed swinger, doesn’t have any power (career .102 ISO), draws walks (career 9.8 BB%), and is a true center fielder with above average defense. Gardner will steal about twice as many bases and is probably better with the glove, but Span will put the ball in play more often (career 12.2 K%). He’s also signed very reasonably — the Twins owe him just $11.25M through 2014 with a $9M club option for 2015. Span would be a great replacement for Gardner this year but replacing Nick Swisher next year? Eh, they’d be lucky to get ten combined homers out of two outfield spots.

Gotta figure the next day and a half will be pretty hectic with rumors and trades and what not, so let’s start a thread for any Yankees-related stuff throughout the day. I’ll update this post and bump it to the top of the site whenever something noteworthy breaks, so the top bullets will be the latest info…

END_OF_DOCUMENT_TOKEN_TO_BE_REPLACED 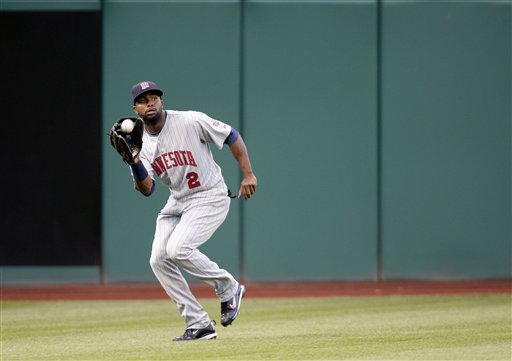 It’s no secret that the Yankees were looking to upgrade their centerfield situation last summer, after all they had agreed to a trade for Mike Cameron in July before Hal Steinbrenner refused to take on the extra payroll. They didn’t stop there apparently, because they also made several attempts to acquire Denard Span from the Twins according to Joel Sherman.  Without knowing for sure, I’d have to think the Span talks came after the Cameron deal was shot down since GM Brian Cashman probably went looking for a cheaper alternative.

Knowing how these things usually go, I’m guessing Minnesota was seeking either Phil Hughes or Joba Chamberlain in the deal while the Yankees were pushing the Brett Gardners and Melky Cabreras and Ian Kennedys of the world. The money wouldn’t have been a problem for Hal considering that Span barely had more than a full year of service time and was making slightly more than the league minimum last summer. Of course, Span signed a long-term deal just last weekend, so there’s basically a zero chance of the two sides revisiting the talks.

The then-25-year-old Span was hitting .292-.381-.388 (.355 wOBA) with 16 steals at the All Star break last season, compared to the .283-.343-.424 (.338 wOBA) batting line and 23 steals the Yankees where getting out of Gardner and Cabrera to that point. Span’s defense in center was below average through the eyes of UZR,  so the Yanks’ duo had the advantage there. However, a 38-point difference in on-base percentage is a huge, especially if you consider that Span would have been hitting ninth for the Yanks, serving as that theoretical second leadoff man.

Combining offense and defense, the upgrade would have appeared to have been marginal at the time, especially if Melky and not Gardner was involved in the swap. Span did go on an absolute tear after the break, hitting .331-.402-.443 with a .366 wOBA in the second half to help Minnesota overtake the Tigers for the AL Central crown. Melky and Gardner combined for just .258-.322-.375 and a .325 wOBA after the break, but of course all of that falls into Michael Kay’s fallacy of the predetermined outcome. The Yankees would have been (even more) unstoppable if they had a nine-hole hitter performing like Span was in the second half.

The Yanks won the World Series, so there’s no sense in contemplating how much of a help Span would have been to the team last year had they managed to pull of the trade. The real question is how such a deal would have impacted the team this offseason. Would the Yankees still have pulled the trigger on the Curtis Granderson swap? Would they have still had the prospects to do so? Swapping out Gardner/Randy Winn for Span in the current outfield alignment would be tremendous, but what about swapping out Granderson for Span? It’s an interesting question we’ll never know the answer too.

Span’s a guy that’s been around for a while, he was the 20th overall pick was back in 2002, and there was a time he was spinning his wheels as a sub-.700 OPS player in the high minors. For whatever reason, maybe a tip from Joe Mauer or just maturing as a player, Span’s plate discipline and walk rate shot through the roof in 2008, and he’s been able to sustain that success in the big leagues. He’s six months younger than Brett Gardner, and clearly a better player. It certainly would have been an interesting move, that’s for sure.