Despite the rumors, Buster Olney says the Yankees and Twins are not having talks about Francisco Liriano right now, and in fact Jon Heyman says the two sides haven’t talked in a month. The left-hander’s name popped up on the rumor circuit (again) last night, though Brian Cashman has maintained that nothing’s going on right now: “I have no talks going on with the Twins. Zero talks. There’s nothing going on. I would love to be able to talk to people, but there’s nothing of quality that’s available.”

Jack Curry wrote today that Terry Ryan, former Twins GM and currently a special adviser to now-GM Bill Smith, was at yesterday’s Yankees-Pirates game, but he was there covering the Pittsburgh squad. “We have people on [the Yankees],” Ryan said. “I’m not.” Cashman told Curry that he’s confident Minnesota will contact him if and when Liriano becomes available, but he’s not going to give up either Manny Banuelos or Dellin Betances. Great mustache Jay Jaffe explained why Joba Chamberlain for Liriano trade would be a win-win.

I have a feeling this Liriano stuff is going to drag on for a while, so get used to it. Yay.

Update by Ben (11:15 p.m.): Ken Rosenthal offers up a little bit more about the state of Liriano: The Yankees, he reports, allegedly “dangled” Ivan Nova and Ramiro Pena in an attempt to land Minnesota’s lefty earlier this winter. When you stop laughing over the lunacy of that trade proposal, read the rest of Rosenthal’s piece. He believes the Yanks could and should land Liriano for Banuelos and Nova.

It started with a Tweet. Jim Bowden, General Manager-turned-XMRadio host, had been talking to USA Today’s Bob Nightengale when the baseball writer let slip something between a rumor and his opinion. In the shorthand of our time, Bowden reported that Nightengale “thinks its possible that Liriano is traded to the Yanks in nxt 2 weeks for Nova or Joba +.”

That simply sentence — 140 characters of juicy Spring Training rumors — set off a flurry of everything. Twitter exploded with conversation as readers emailed us questions. Could this really be true? Would the Twins be willing to ship out left-handed ace Francisco Liriano for a package headed by either Ivan Nova or Joba Chamberlain plus some prospects? Which Yankee fan would volunteer first to drive to Minnesota with that haul to its new team?

Yet, as we said just last week, where there is smoke, there is often a fire, and later in the day, we learned of a smoke condition. As Andrew Marchand reported a short while ago, the Yankees called the Twins over Liriano earlier this offseason, according to a source. The kindling is there. Anyone got a match?

But slow down. On the record, Brian Cashman denied any current trade talks. “I’m not talking to anyone about anything right now,” the Yanks’ GM said. “Nobody’s available. Nobody of value, anyway.”

Of course, knowing Cashman’s history, that probably means some trade will go down within the next few weeks, and all of those questions about the Yanks’ rotation will disappear like a puff of smoke. Or at least, as March dawns and Opening Day draws near, I can dream.

For the Yankees, Liriano poses an interesting question. If he’s healthy and devoted, he’s an ideal left-handed pitcher for the Bombers. He’s a high strikeout guy who’s given up less than a home run per 9 innings in his Major League career. He’s also only 27, and after battling an injury that shelved him for the entire 2007 season, he’s entering his prime and nearing free agency at the same time.

Yet, as has been detailed meticulous by Jay Jaffe on Baseball Prospectus (in a subscribers-only piece), the Twins and their lefty have a tough relationship. A long time ago, when Liriano was but 24 years old, the club publicly questioned his ability to communicate with the club. They have questioned his injury history. They have questioned his approach to strike outs (which, in my and Larry Rothschild’s book, isn’t something to question). He doesn’t fit the organization as well as he might, and that leaves many wary.

Yet, as Jaffe noted, the Twins should have no reason to deal Liriano. Writes the BP scribe, “There’s little reason to believe that Liriano has peaked, that he won’t deliver value for the Twins far in excess of Pavano and the other members of the Twins’ rotation, or that the Twins can’t afford him.”

And yet, his name won’t go away. The Yanks won’t part with Jesus Montero for Liriano, and they would have to think long and hard about dealing Manny Banuelos. Yet, if the Yanks need pitching and the Twins want to rid themselves of Liriano while the returns are high, they could get a nice haul. If that package starts with Nova or even Joba, though, no one in the Bronx will think twice about pulling the trigger. Whether Twins GM Bill Smith will settle for such a seemingly low-ceiling group of players, though, will be just another saga of Spring Training. This story won’t wrap up any time too soon.

Via Bob Nightengale, the Yankees are keeping a close eye on Twins’ lefty Francisco Liriano, and the Twinkies are keeping tabs on some Yankees’ prospects. We first heard about Liriano potentially being available earlier this month, so this isn’t terribly surprising. The 27-year-old showed up to camp with a sore shoulder and had an MRI, but it came back clean and he threw a bullpen this week with no problems. There are concerns about Liriano’s durability but basically none with his performance: he’s a strikeout (career 9.30 K/9) and ground ball (48.2%) machine, exactly what you want. There’s no harm keeping an eye on the guy.

The story, though only a few hours old, has made its rounds. On Wednesday evening The Minnesota Star Tribune’s Joe Christensen wrote that the Twin would consider trading Francisco Liriano, perhaps as early as this spring. Liriano doesn’t factor into the team’s long-term plans, writes Christensen, and with six possible starters on board they could use Liriano to help shore up an area of need, perhaps in their infield.

Even weak rumors of Liriano’s possible availability will certainly pique the interest of Yankees fans. He established himself throughout baseball in 2006 when he appeared in 28 games and made 16 starts, finishing with a 2.16 ERA. He possessed the beneficial combination of strikeouts and ground balls, and all indications were that he fit the bill of a true ace. Then came Tommy John surgery, which cost him a full season and perhaps affected two more. But in 2009 Liriano returned to his high-strikeout, low-walk, high-groundball ways. While his ERA was 3.62, his peripherals suggest that he might have better results in store.

Why, then, would the Twins want to trade him? His health record probably headlines the list. He had injury problems in the minor leagues, which played a part in the Giants’ decision to trade him in a package for A.J. Pierzynski. Then, at the end of his spectacular debut season, he missed the final month and a half with elbow and forearm problems that required Tommy John surgery to correct. That cost him 2007. When he came back in 2008 he wasn’t the same, and things didn’t get better in 2009. What’s even more concerning is that he spent time on the DL that year with what was termed elbow fatigue.

In 2010 Liriano demonstrated a full recovery, striking out more than a batter per inning and allowing just nine home runs all season. Still, he had his issues. He still pitched only 191.2 innings in 31 starts, which isn’t quite ace material. According to Christensen, he also developed a reputation for faltering in tight spots. All of this might motivate the Twins to explore trade situations. I’m not sure they’d consider a move in the spring; having six able starters is a blessing. But maybe if they fall out of the race they’d consider trading him mid-season.

We learned earlier in the winter that the Yankees already inquired on Liriano. There certainly has to be some level of interest. But as in all trade situations, the key lies in the return. Jesus Montero’s name will likely come up, but I wouldn’t trade him for Liriano. As was the case with Zack Greinke, Liriano has just two years until free agency. That’s not enough cheap control to justify trading Montero. Surely any trade would involve Manny Banuelos, and since the Twins’ infield is in something of a disarray, I assume Eduardo Nunez would also be part of a package.

I’m not sure if that’s enough for the Twins. That will depend on what other teams offer, and whether the Twins are really motivated to move Liriano. Even if they are, I’d be hesitant to deal with them. These aren’t the same Twins that traded Johan Santana for four spare parts. Their 2011 payroll is already over $100 million, and they’re expected to contend in the AL Central. How will it help them to trade the only pitcher who approximates an ace? Even if he doesn’t factor into their long-term plans, he can still fit into their 2011 and 2012 plans.

A name such as Liriano might sound appealing, but if a team is willing to trade a pitcher like that there’s always something else going on. We’ll see the Yankees connected to him for sure, but I would be surprised to see a situation really develop. There’s just too much that doesn’t make sense about the Twins’ reported willingness to trade him. 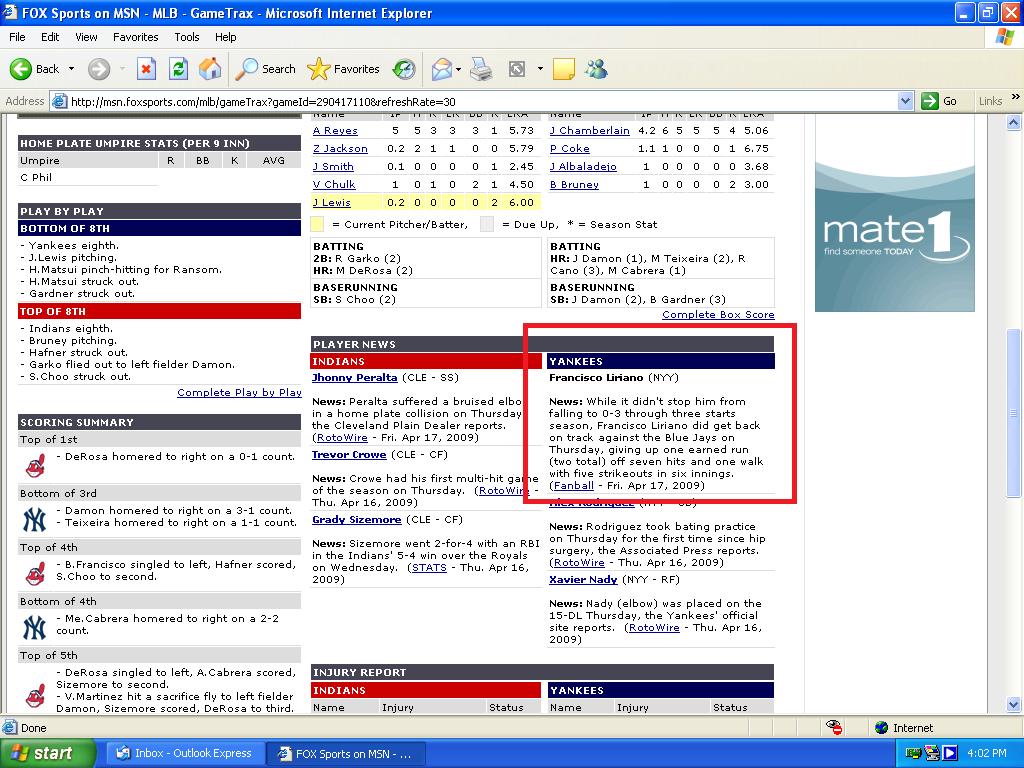 Rumor has it the Yanks only had to give up Melky Cabrera and Ian Kennedy, but were willing to throw in Kei Igawa if the Twins included Joe Nathan in the deal. (h/t JasperJohn for the email)