Ain’t much to say tonight. That was ugly all around, the Yanks lost a chance to gain ground as the Mariners fell to the Angels. But let’s chat about two pitchers not long for their current roles.

A few weeks ago, I noted that Mike Mussina was thriving because his strike out totals were up. I also wondered if that success was a mirage. I wondered if his good July was more a product of the crappy teams against which the Yanks had played rather than some sort of Fountain of Youth that Mussina had developed. When I said that his next few starts against the Tigers and Angels would go a long way toward tell us about the real Mike Mussina, I didn’t expect this debacle.

In his last three starts — two against Detroit, one against The O.C. Angels — Mussina has lasted a total of 9.2 innings. His up 25 hits allowed and 5 walks have led to 19 earned runs, and he’s mustered just 3 strike outs. His fastball is sitting in the low 80s, and his breaking pitches aren’t doing much of anything.

That being said, to whom do the Yankees turn? Matt DeSalvo was great tonight, but was 1-3 with a 6.18 in 7 Big League appearances earlier this year. I would always rather take my chances with Mike Mussina than Kei Igawa, and Ian Kennedy just isn’t coming up. Maybe the Yanks go with Steven White, but in reality, their best bet has been turned into their 8th inning set-up guy. Joba won’t be starting this season, but maybe he should be.

As the Yanks look past next week to next year, they’re going to have to address the Mike Mussina issue. Maybe they’ll buy out the last year of his contract, but I doubt Mussina would go for that. He’s due $12 million, and he wants to pitch. The question becomes can he pitch?

On the other side of things is Sean Henn. Henn, 26, has gone 6.1 IP over his last three appearances. His 15 hits and 8 walks have led to 15 runs (and two losses). At this point, I truly believe something is going on between the Yankees and Chris Britton that has kept this pitcher in the minors. Maybe he’s going through some personal issues. Maybe there’s some odd beef between him and Torre. Maybe the Yanks wanted to closely monitor his innings after watching two other relievers (Chris Ray, B.J. Ryan) blow out their arms after getting overworked by the Baltimore Orioles. But any way you slice it, Henn’s gotta go.

Question: Who are the three candidates to replace Mike Mussina in the rotation if he struggles on Monday?

I solemnly swear to utter only good words about Mike Mussina in this post.

After 24 hours of bashing the man, I need to make it up to him. For all the grief I’ve given Mussina today here and here, Mussina deserves recognition and praise for the 209 starts he’s made for the Yankees. In that process, he’s won 100 regular season games and has lost just 62. He’s also thrown some very memorable playoff games as well.

So in recognition of a pitcher who’s been a steady presence on the Yankees since 2001, let’s look at Mike Mussina’s five best games in pinstripes.

END_OF_DOCUMENT_TOKEN_TO_BE_REPLACED

Via this Fark thread comes a gem of a poster: 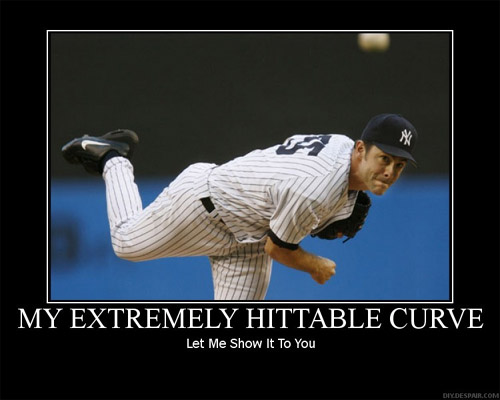 Over at WasWatching, Steve took care of some research I was about to conduct on Mike Mussina. Here’s what he (and I) have found:

In the 12 games started by Mussina where the Yankees lost: Mussina averages 4.8 IP per start and has an ERA of 8.16.

In the 10 games started by Mussina where the Yankees won: Mussina averages 6.3 IP per start and has an ERA of 2.57.

While Steve’s conclusion is that Mussina is good while on and terrible while off a la Randy Johnson 2006, I have a different conclusion: Mike Mussina simply cannot pitch against good teams and expect to win.

The ten games in which Mussina has pitched and the Yanks have won came against some pretty woeful teams going through bad stretches. He beat Texas in back-to-back starts in May; he has pitched well in wins against the White Sox twice; he beat the Royals twice; he stifled a pathetic Oakland offense and downed the Devil Rays.

On the flip side, Mussina has gotten shelled by the Red Sox (twice), Angels, Tigers, and, um, the Devil Rays and Orioles. He can’t beat playoff contenders and seems to have problems with teams that have a few good hitters.

And, hey, we’ve got him for another season too. That two-year extension just looks better and better with every passing minute. Ted Lilly and his 3.88 ERA would have come to New York for a lesser per-year deal that Mussina received.

With the Red Sox winning earlier in the evening and Seattle taking a comfortable lead into the late innings against Minnesota, Mike Mussina turned in a vintage performance. At 10:56 p.m. in New York, Mussina was removed from the game after a whopping five outs. His final line: 1.2 IP, 7 H, 7 ER, 2 BB, 1 K. And for the first time all season, I will be going to bed before the Yankee game ends. On second thought, I may just stay up yet.

Way to go, Moose. 4-0 with one out in the top of the first. After A-Rod’s error, that’s just so predictably Mike Mussina.