It’s rough being an old pitcher on the Yankees these days. All the talk swirls around the young arms: Joba, Ian, Edwar, Phil. Even Brian Cashman gushes for paragraphs about Humberto and Ross, not to mention the slew of injured pitchers rehabbing with the Yanks.

For the Yankees and their October dreams, success lies squarely in the past, and starting tonight, we’ll see if that past is ready for one last gasp of greatness.

END_OF_DOCUMENT_TOKEN_TO_BE_REPLACED

After giving up five runs in four innings, Roger Clemens left the game today. His first stop: New York-Presbyterian Hospital for an MRI. Even if it comes up completely clean, he’ll miss his next start. Mike Mussina, who didn’t look very impressive but at least was hitting 88 and 89 on the YES gun in his 3.2 innings, will start in his place.

Some ruminations on Roger Clemens’ season numbers, if you will.

Clemens is getting paid approximately $1 million per start, and recently he’s failed to deliver. Alarmingly, his hits allowed are up and his strike out numbers are well below his career low. If the other options that we’ve seen – Kei Igawa, Tyler Clippard, Chase Wright – weren’t so dreadful, we’d be a whole lot more concerned about Clemens’ longevity and pitching than we are right now.

On May 6, the Stadium erupted when Roger Clemens announced his return. Today, on a hot, muggy day in New York, Clemens is just a minute or two away from his debut. He’s facing the Pittsburgh Pirates, and I’ll be here live-blogging. So let’s get to work.

Seventh Inning: The Yanks score three runs in the top of the sixth, and Brian Bruney is on the hill in relief of Clemens. Cairo is at first, and Melky makes up for last night’s error with a great play to lead off the inning. That’s it for the live blog. We’ll have some Clemens analysis later on. Let’s hope the Yankee bullpen can nail down another win.

For the rest of the live blog, continue reading below.

END_OF_DOCUMENT_TOKEN_TO_BE_REPLACED 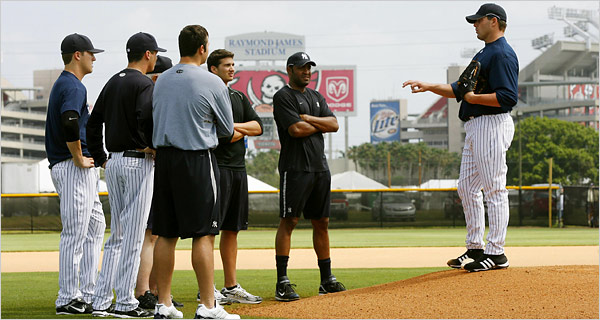 * it’s been established that it’s not pitching guru Nardi Contreras, but it might be Jose Veras…or about a million other guys…

It’s only fitting that Rocket’s standing up on the mound, at a higher level than the other guys.

Quote of the Year:

Do the Yankees see Clemens as a mentor to Hughes? â€œI donâ€™t think itâ€™s by chance that Billy Connors has him out there playing catch with me,â€ Clemens said.