February 5th: Jon Heyman and Ken Rosenthal say the contract is worth $1.2M guaranteed if Rivera makes the team, with another $800k available in incentives. I guess that’s the going rate for mediocre right-handed hitting outfielders these days — Diaz’s contract has the exact same terms.

January 28th: The Yankees have added another player to their inevitable right-handed outfield bat competition in Spring Training. Andrew Marchand and Wally Matthews report New York has signed former Yankee Juan Rivera to a minor league contract with an invitation to big league camp. No word on the money, but I’m guessing it’s in the low seven-figures if he makes the team. Chances are he can ask for his release if he doesn’t make the club rather than report to Triple-A.

“Obviously, he’ll compete for that vacancy for the right-handed hitting outfielder,” said Brian Cashman to Anthony McCarron. “He played for (High-A Tampa manager Luis Sojo) in Venezuela and Sojo said he was playing well and in good shape. We’ll see what he can do.”

Rivera, 34, originally signed with the Yankees as a 17-year-old out of Venezuela back in 1997. He spent parts of three seasons in the Bronx before being traded to the Expos as part of the package for Javy Vazquez during the 2003-2004 offseason. Rivera spent just one year with the Expos before being traded to the Angels for Jose Guillen. He’s played for the Blue Jays and Dodgers most recently.

Rivera joins fellow scrap heap pickups Matt Diaz (minor league deal) and Russ Canzler (waiver claim) as right-handed bats with a chance to make the team out of Spring Training. Internal options like Melky Mesa and Ronnie Mustelier should not be ruled out either. The Yankees recently signed Dan Johnson to a minor league deal, and I suppose any of these guys is a candidate for the DH role as well. That position as well as bench help will be the priorities in the coming weeks.

With each day that ticks off the calendar, the less likely it is the Yankees will spend real money to upgrade the roster. That could change in an instant of course, but the currently available options aren’t all that appealing or worth big bucks. There are no legitimate starting catchers available, few quality DHs, and outside of Scott Hairston and his demands for a multi-year deal, no right-handed hitting outfielders of note.

The Yankees have been stocking up on miscellaneous right-handed outfield bats in recent weeks, or at least as much as signing Matt Diaz to a minor league deal and claiming Russ Canzler off waivers can be considered “stocking up,” anyway. Melky Mesa is the team’s best in-house option for the role, so I expect them to continue digging around for low-risk players to compete with these three in camp. Here are five such players who could presumably be had on minor league contracts.

Shelley Duncan
Fun Fact: Duncan actually started three games as the cleanup hitter for the Yankees back in 2008. That was the year after the big five homers-in-seven games binge put him on the map. The 33-year-old moved on to the Indians a few seasons ago and has hit .238/.316/.421 (102 wRC+) against left-handers over the last three years (92 wRC+ in 2012). As always, Duncan will draw walks (9.5% walk rate since 2010), strike out (24.8%), play poor defense in the outfield corners and at first base, and smash forearms. More than anyone else in this post though, Shelley can hit the ball out of any park when he does run into one. That just doesn’t happen often enough.

Ben Francisco
Francisco, 31, has been typecast as a right-handed platoon bat over the years despite a negligible split — .247/.315/.408 (97 wRC+) against lefties and .252/.324/.380 (94 wRC+) against righties since the start of 2010. Having no platoon split is generally a good thing, but it doesn’t help when the player is a below-average hitter overall. Like everyone else in this post, Francisco won’t steal any bases or offer much help on the bases. He fits best in left field but can play right in a pinch and center in an emergency, so that’s nice. Still, if you’re looking for a platoon bat, it would be nice if he could, you know, actually hit well against pitchers of the opposite hand.

Lou Montanez
Once upon a time, the Cubs made Montanez the third overall pick in the entire draft (2000). He has just 323 career plate appearances in the show since then, during which time he’s posted a 50 wRC+ overall with a .204/.234/.279 (31 wRC+) line against left-handers in a meaninglessly small sample. Over the last two seasons in Triple-A, the 31-year-old had tagged southpaws for a .345/.429/.525 batting line with a 8.1% strikeout rate compared to a 12.3% walk rate. More walks than strikeouts is always fun. Montanez has a ton of experience in all three outfield spots and actually played the middle infield once upon a time (drafted as a shortstop), but that ship has sailed.

Juan Rivera
Another former Yankee, the 34-year-old Rivera had the worst season of his career in 2012 (81 wRC+ overall) while battling hamstring issues. He still managed a decent .260/.312/.433 (107 wRC+) line against southpaws, and over the last three seasons it’s a .270/.329/.434 (109 wRC) line. Rivera’s strength remains his ability to get the bat on the ball (12.9 K% and 84.2% contact rate since 2010) and be somewhat willing to work a walk (7.1 BB%), though he’s butcher defensively both in left field and at first base. There’s more big league experience here than with the other four guys in this post combined, but I’m not sure how much that helps Rivera’s case at this point of his career.

Vinny Rottino
Rottino, 32, received 97 of his 110 career big league plate appearances with the Mets and Indians this past season. He owns a miniscule 43 wRC+ in the show, but that tells us nothing given the sample size. Rottino has tagged Triple-A southpaws for a .333/.383/.502 batting line over the last two seasons though, which includes an 11.4% strikeout rate and a 7.5% walk rate. He has a ton of experience at the four corner positions as well as first base and behind the plate, though he’s just an emergency option at catcher. Still a nice skill to have. No one in this post offers as much position flexibility or as little big league experience as Rottino.

It’s hard to believe it’s been ten years since Juan Rivera made his big league debut with the Yankees, when he earned a September call-up in 2001. Baseball America considered him one of the game’s top 100 best prospects before the 2002 and 2003 seasons, and Rivera hit a respectable .262/.302/.427 with eight homers and one golf cart-related injury in 280 plate appearances for the Yankees before being traded to the Expos as part of the Javy Vazquez package.

Rivera bounced from the Expos to the Angels to the Blue Jays in the eight years since the trade, hitting .278/.329/.445 (105 OPS+) during that time. The Blue Jays designated the now 33-year-old for assignment over the weekend, so let’s look to see if he could potentially fill a need for the Yankees…

With a $5.25M salary this season, it’s pretty safe to say that Rivera will clear waivers. The Blue Jays figure to find a decent number of teams interested in acquiring him via trade if they’re willing to get some of that money, though in recent years we’ve seen GM Alex Anthopoulos be pretty hesitant to trade within the division. Perhaps that wouldn’t be such a big issue for a spare part like Rivera.

Andruw Jones is hitting .234/.310/.453 in 71 plate appearances against lefties this year, and his numbers over the last few seasons (.219/.352/.428 vs. LHP from 2008-2010) suggest that Rivera is the better platoon option at the plate. Andruw’s not the defender he once was, but he’s probably still better than Rivera, even if it’s just marginally. His $2M salary is not going away, but I think there are legitimate reasons to eat the rest of that salary and bring Rivera aboard if he winds up in the open market. I wouldn’t give up anything of value to acquire him in a trade, nor would I absorb that salary on waivers, but as a free agent for the pro-rated portion of the league minimum? Then go for it. I’ll be surprised if he makes it that far though. 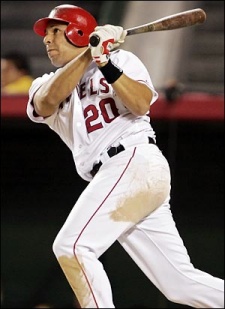 At FanGraphs yesterday, Dave Cameron mentioned Juan Rivera as a free agent bargain. The 30-year-old will hit free agency for the first time this off-season, though his stock is far from its highest. His 2007 and 2008 campaigns left much to be desired, the former being dramatically shortened after breaking his leg during winter ball, the latter due to the Angels having a logjam in the outfield and only getting him 280 trips to the plate. In those 280 appearances, though, he hit a paltry .246/.282/.438. Not much of a contract year performance there.

Presumably, the Angels will let Rivera walk. They already have Torii Hunter, Gary Matthews, and Vlad Guerrero under contract for 2009, they have Reggie Willits to fill in as a 4th outfielder, and there’s a chance they could bring back Garret Anderson, whose 2009 option they declined yesterday. With those options, plus Rivera’s ineffectiveness, the outfielder could find himself in a new home in 2009. Why not bring him home to the Bronx?

Don’t get me wrong, though. I’m not advocating we sign Rivera to replace Bobby Abreu, per se. Given his issues, Rivera could be a cheap signing this winter. A few teams may be in for his services, but it’s not like he’s going to score a 3-year, $15 million deal anywhere. Likely, he’ll get a year and maybe an option, and a salary, I dunno, below $2 million, maybe with some incentives. That’s just a guess, though. You never know what’s going to happen during the Hot Stove.

Ideally, the Yanks get Rivera as their fourth outfielder. This leaves them with Damon in left, Melky/Gardner in center, Xavier in right. Rivera is mostly a right fielder, so when he plays Xavier can move to left and Damon can shift to center or play DH. Or Xavier sits. There are plenty of ways the Yanks can work this. It means that both Melky and Gardner start in center field — one for Scranton-Wilkes Barre, though.

We do know that Rivera had skills, and could bring it at the plate. Those skills have certainly eluded him over the past few years, and there’s no guarantee that they’ll come back. Say they do, though. Say he takes to an off-season workout and comes into camp ready to hit like he did in 2006. You then have a good problem on your hands. You can play him in right, Xavier in left, and then have three center fielders to choose from. You can dish Damon to a team whose center fielder bites the dust early. You can put him in center and hope that your offensively superior outfield can hang defensively. The chances of this are slim, but it’s still a possibility. That’s why it’s called a flier.

Outfield certainly isn’t the top priority of the off-season, but the Yankees could pull a small move like this in order to give them some flexibility and open up their options. Rivera is a guy who has the potential to start, but you can live with as a bench guy. Even if his best years are behind him, he still has some power — he hit 12 homers in those 280 plate appearances. It’s doubtful any team pursues him as a starter, so teams should be on pretty much even ground. Since the Yankees have the financial advantage, they could probably pull him in if they really wanted. I think they should. Do you?